Report on the services performed in 2018


As an assistant pastor of the Dean’s Office, pastor in the hospital in Reghin as well as co-worker at the Van den Heerik Foundation, my service consists of three parts, as follows:
1.On Sundays, worship service in the congregations of the diocese, where they ask me to serve as substitute, as well as substitute for the Dean in his congregation when I am asked to do so.
2.On Monday, Tuesday and Friday – visiting patients, pastoral care In Filpișu Mic and Breaza.
3.On Wednesday, Thursday – service in the Municipal Hospital Eugen Nicoara in the following wards: Dermatology, Internal Medicine Ward, Surgery, Gynecology, Maternity Ward, Children’s Ward, Ward of Infectious Diseases, ENT.

1.On the occasion of Sunday sermons, I served in the following congregations: Breaza, Peris, Filpisu Mic, Pacureni,Teaca, Reghin.
2.In the socio-pastoral programme “Bread for the Body, Bread for the Soul”, which was launched by the Dutch Foundation - Van den Heerik in Breaza. As of June 1st, 2011, 102 people subscribed. Of these, in 2018, 70 people received help. From Filpișu Mic- 21 people, Breaza- 49, in total- 70 people.
In addition, the number of occasional patients is 15.

Besides caring for the old and sick people, I took their blood pressure and blood sugar level. I also gave out home-care equipment (3 wheelchairs, 4 crutches, a toilet seat, 2 walking frames, diapers for 20 people, 4 beds) . Every month I brought diapers to the bedridden  patients.  I gave out medical equipment for the local hospitals, care homes and healthcare centers. This year we gave out hearing aids to 11 people.  I undertook the collection of the taken pictures and their transmission to Fazakas Imola, the leader of the Van den Heerik Foundation in Breaza.
I would like to thank the Van den Heerik Foundation, in the name of the patients, the food packages, which were delivered in Christmas and Easter.

3.I started my work in the Christmas of 2008 in the Municipal Hospital Eugen Nicoara in Reghin. I did the counseling work of the patients, their family members (sometimes the hospital staff’s) voluntarily and occasionally, but with love. During the holidays I held worship services, I delivered the Communion in every hospital ward.

As of June 1st, 2011, I now officially and weekly continued what I have begun/started earlier, as subordinate pastor of the Dean. In the year of 2018 I visited a total of 520 patients. On the occasion of these visits I performed the following services: pastoral counselling and conversations with the patients, distribution of prayer books, Bibles, Christian literature among the people in the hospital, worship services. I delivered the Communion in total to 57 people. Monthly, on average, I visit 50 people in the hospital. This year, during Christmas we distribuited 100 packages among the patients, regardless of denomination. The needed money for these packages was provided by the Transylvanian Reformed Church District.
SOLI DEO GLORIA!
God bless you!
Yours sincerely,
Szép Ildikó
Breaza, 15. 02. 2019

Posted by Imola Fazakas at 6:30 AM No comments: 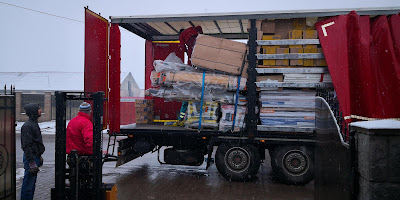 This morning arrived the truck with the construction materials. A small amount was unload in Breaza  the rest went to Toth Attila in Peris. The building materials he can use by the construction of his children home.
This ist the  first time when the transport was made by a Romanian company. Everything went well also in Peris. Because was not possible to enter in the yard there, or to stop be side the main street they had to unload by  the closest side street  . Attila was very satisfied with the materials he received.
Thank you !
Imola

Posted by Imola Fazakas at 5:42 AM No comments: