The truck with Christmas packages arrived 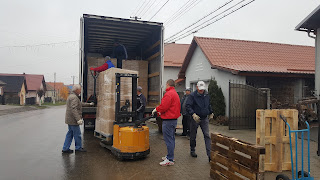 Yesterday evenig 18:30 the truck arrived with one part of the Christmas packages .The  drivers are Ben and Siem .
The unloading we have started in the morning at 9:00,with a few volunteers from the willage. After we ounloud our paart the truck left to Reghin to bring personally the packages to the Foundation Phoneo. Near the packages we have resewed also couches, pieces of furniture and chairs ,these ones are going to be picked up by Glodeni Elderly home , tomorrow .
The distribution of  Christmas packages we start tomorrow to give out to our contacts.
The pictures with the unloud  over here.
For the further distribution of the packages follow the blog.
Kindly regards!
Imola and Csabi

Yesterday evening our social assisted lady Coman Floare , age 86 ,died in the elderly home in Deda. She got a heart attack .
The city hall is making all necessary arrangements for her funerals,which will be tomorrow around 13:00 o`clock.
May she rest in peace!
https://photos.app.goo.gl/v9kXLd4jmVcas6Aj2

Today the pictures from the funerals https://photos.app.goo.gl/SjKJlOmc2zJxI5c22
Posted by Imola Fazakas at 1:22 AM No comments: 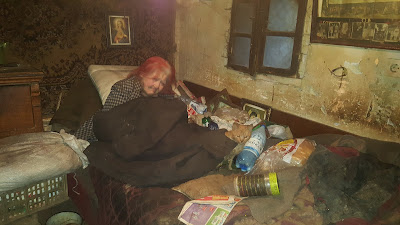 Coman Floare was born in Bistrita , she had three sisters and three brothers.Her mother died when she was three years old.
For two years she was an artist in Bucharest near Benone Sinulescu a famous folk singer,she was working afterwords in a puppet theater. Later on she went to Rastolita to work in a tree plantation where she  meet Puiu his partner.
Coman Floare and Puiu Dumitru lived together 20 years in Breaza and a few years ago they  moved to Filpisu Mic where they bought a small house.
When they were living in Breaza(2005) ,  were helped by the foundation with food supplies .Their living condition was always a bit strange because of their mental handicap.Three years ago she become sick and could not get out from the bad .Puiu was taking care of her as he could.
This was the situation last year https://photos.app.goo.gl/adNoAljJKx4bHL2C3
She is now 86 year old  , no income , no papers,no birth certificate. Luckily the identity card we have found between  their stuff together with her health insurance card(witch was never used).The city hall made a new birth certificate, so ..... 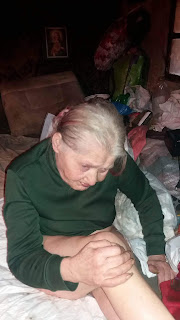 Monday morning I have caled Diakonia Foundation to give her the fist medical assistance (washing her), when she was ready the willage social worker called the ambulance and she was taken to the Hospital in Reghin .
The doctors from the Ambulance diden`t wanted to enter in their home because they sad it is ``an infection outbreak``.
Now she lays in the hospital in good , caring hands, the doctor is making all necessary investigations, except psychiatric and psychologist consultation . But this two finally are also going to be done Thursday afternoon. I have talked with  two privet doctors and when they saw the situation they both promised to help me with the investigations .
Floare is staying in hospital until Friday, then the ambulance will take her to Deda elderly home thanks to the Foundation who will pay her costs until we manage to get her papers for handicap grade pension  .
When that is ready  than she can be moved in a state elderly home probably in Reghin . In the meantime time will do the same procedure with Puiu.
This case was an emergency situation  , and luckily with a good collaboration we could resolve it, thanks to  everyone help and involvement.
More pictures over here.
Best regards!
Imola Fazakas