Posted by Imola Fazakas at 5:03 AM No comments:


In the name of the roma community from Sebes,  as the secretary of the Saint Elisabeth association of the roma culture from Sebes-Alba , I would like to thank you for the joy that you made us feel by offering us 200 Christmas packages.

Our community has approximately  4000 members ( 530 families) .  In present,10% of the inhabitants traveled abroad to find the possibility to make a better living for themselves, because most of them doesn’t have a job and because of that they can not support their family. Before 1989, 90% of the active roma population from here  had a job at the socks factory , leather factory , at the timber processing plant or at the sanitation service of the town .After the revolution, they were dismissed , they were without a surse of income. This is the reason they left abroad. Some of them returned , others found a home abroad, and others  without any studies, or  craft  can’t find a permanent job they come and go . Unfortunately,because of the poverty  we have a high rate of school abandonment in the case of the students of  roma ethnicity.
To your knowledge , with this Christmas packages you brought joy to to 200 people living in poverty, sick people , children who are left in the care of their relatives because the parents left abroad . 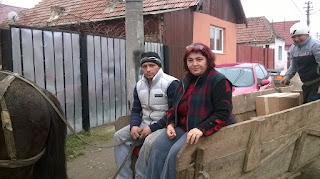 We would like to say thank you to everyone  who made this possible and made the people from Sebes- Alba to feel the joy of Christmass in their home and soul.
God bless you , we wish you health and long life.
Merry Christmass and a Happy New Year,
Margareta Iancu – Sebes -Alba 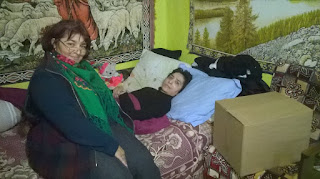 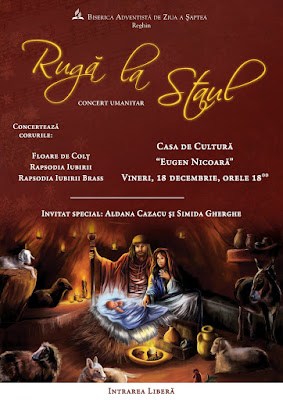 A quiet evening full of Christmas atmosphere. That was Friday, December 18 at the House of Culture "Eugen Nicoara" when was held the humanitarian concert of carols "Prayer bey the Manger" organized by the Adventist Church. Were prepared packages that ware given to  children's (Social cases)Monday, December 21. The packages were financed by Foundation Van Den Heerik  Breaza.
Bey the pleasant musical evening 400 spectators have enjoyed the birth of our Saviour. 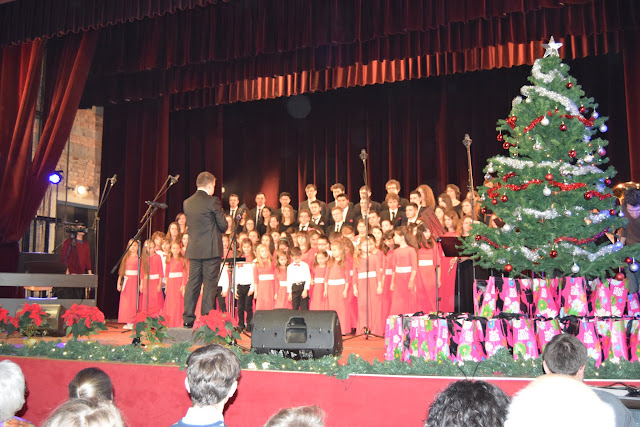 More pictures from the concert over here 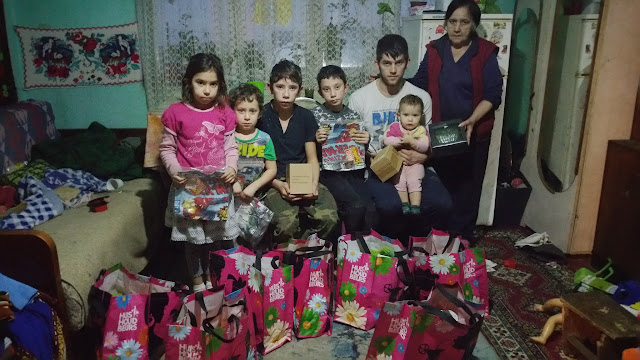 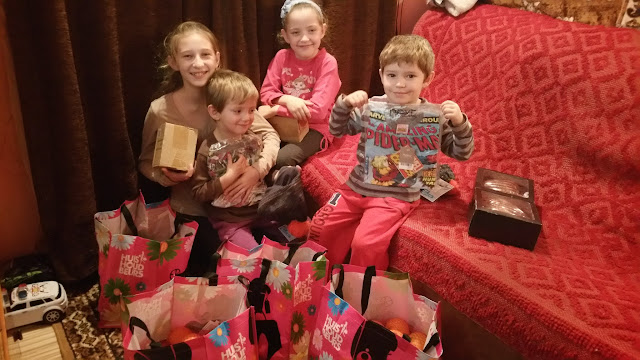 More pictures over here
Here is the thank you letter from Sabin Oltei ,pastor of the Adventist Church Reghin.

"In dec 18, The Adventist Church has organized a humanitarian concert. In order to accomplish the event purpose, we received from Van den Herich Fundation through Ms Imola Fazakas some goods and money. We prepared 100 packets comprised bisquits, bowls, electric hearts toys, sleed hoods, soaps, t-shirt. We’ve spended 1300 RON to buy chocolates, wafers, stiks, juices and oranges.
The pakets has offered to 100 children who are sick and/or pood.The list was made by the City hall of Reghin .  These children and their parents was very thankfull for your gifts.
Thank you for your generosity.

Pastor Sabin Oltei"
Posted by Imola Fazakas at 4:02 AM No comments:

Arrivel of the last truck with Christmas packages 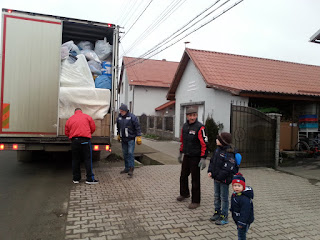 On 11 December has arrived the  truck with the  rest of the packages.
Maarten Koel and Jaap Ligthart, had their first stop in Botosani and than Breaza where they helped us further in the distribution. 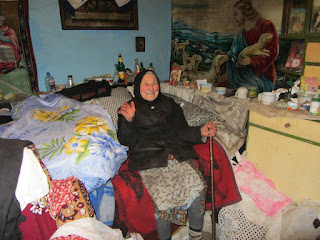 On Saturday we broth the packages to Urmenis bey Elena , where  together with the kids we have helped  bey cheering . It is a great filling for them too ,and they love to be part of it.
Together we have seen the happiness and tears of the elders ,to joy of receiving .

The pictures you can see over here. 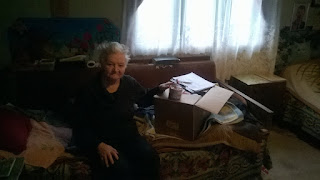 In Breaza and Filpisu Mic the beneficiaries of the program Bread for the body bread for the soul, have recived the packages too .Here the link with the pictures.


Thank you for everybody`s involvement in this action and in the name of the beneficiaries we wish you Merry Christmas and Happy New Year !

Posted by Imola Fazakas at 6:45 AM No comments:

People of Tigmandru have recieved the packages 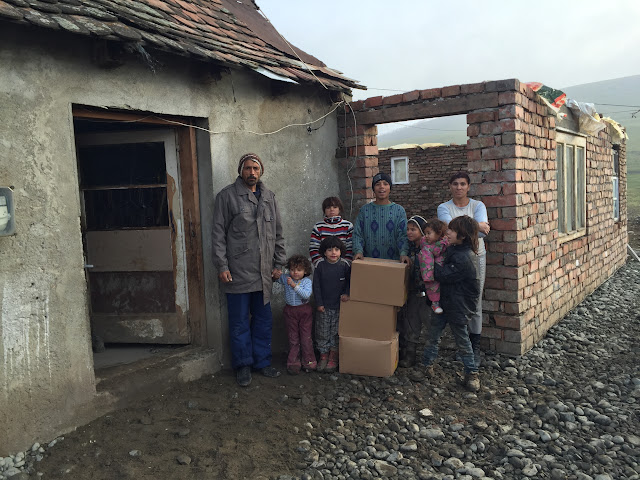 The Christmas boxes are here for the inhabitants of Țigmandru, România.
Imolo and Csabi gave us 90 boxes with food and toys for the poor people of Țigmandru. Together with several helpers from the village,
on Sunday and Monday  we distributed these gifts to the poor families.
They  enjoyed them very much and are very grateful to those who send them,and also to the Foundation Van den Heerik Breaza.
The adults were glad for the food which gave them the chance to have all they needed to prepare a tasty celebration meal, and the children were thrill for thewonderful toys.
Thank you for the kindness and support you show to us every time in the celebration season.
May God bless you abundantly!
Yours faithfully,
Pastor Horea Tămășan
More picture below,
https://picasaweb.google.com/109836842144733868165/ChristmasPackagesTigmandru2015
Posted by Imola Fazakas at 3:30 AM 1 comment: 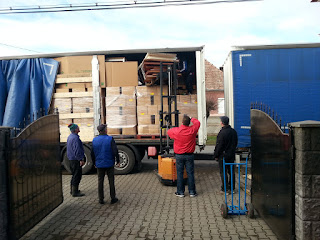 This year also, for Christmas, Stichting Promotie from Holland has made packages for people in need. Wednesday has arrived the first truck with the packages with Charles Buiter and Gerrit de Boer as drivers.750 packages are going to be brought to social cases , old people and roma communities.
The packages will be divided in the following weeks until Christmas with the help of our contacts with who the foundation is collaborating/working for years:
1. In Breaza and filpisu Mic by me(Imola Fazakas), and Reformed pastor Szep Ildiko, beneficiary's are the people from the progam called ,,Bread for the body bread for the soul"
2.In Urmenis and its area by Social worker  Negru Elena beneficiars are old people and roma families
3.In Tigmandru by Pastor Horea Tamasan -beneficiaries are the Adventist Community from Tigmandru
4.In Deda -Mures we are having two contacts one is,  Rodica Bandila nurce by the Old people home  , and Vlaicu Fanica member of a Rooma Organization .
5.In Sebes -Alba by Margareta Iancu, member by Sf.Elisabeta Organization for the roma culture.
6. In Voivodeni by Reformed pastor Denes Csaba.
On 10:00 we have started to unloud the truck , Foundation Phoneo camed also around 13;00 for their part and than around 16:00 camed pastor Horea Tamasan for the packages in Tigmandru .After he left we loud the truck and went to bring the packages to Deda by Rodica  .
Today(Monday)Ildiko too had started the distribution soo we will have pictures from it .
Thank you in advans for Promotie and all the voluntiers who helped over there.
More pictures you can see overe here.

Posted by Imola Fazakas at 5:53 AM No comments:

A few weeks ago we have recived from the Foundation Van den Heerik Breaza throw Imola  and Csaba many useful things , for our school like:
1. benches and chairs in classrooms where  were not enough;
2. Round tables in the kindergartens;
3. Chairs in the halls ;
4. chairs for the dining room table;
5. saucers kitchen sets
6. bags with clothes I gave to the children's;
7.daily pads which we distributed to  girls;
8. mattresses which we use in the kinetotherapy
9. mattresses in the gym;
However we are very grateful for everything, and the children were also  enthusiastic receiving them.We hope further  for a good collaboration .
Sincerely, Odet Farcas, pedagogue Professor CSEI, SAM, Reghin

Center for Inclusive Education School No. 3, SAM Reghin, located in the district Apalina str. 12 from Reghin Castle, was established in 1959 as a necessity on schooling and professionalization of children with special educational needs who had limited chances access to education than other children.It was the first school especially designed for children with mental disabilities professionalization. The School was arranged in an old castle, whose interior was rearranged and resized to ensure the optimal operation of the educational process and recovery.
Many students of the school come from orphanages or families with mediocre or even poor education. This is because the School is close to the Roma community Apalina. Because of this situation the  school includes students who have special educational needs and complex evaluation services judgment.
The  2002-2003 school year was the experimental time of the Therapeutic activity-rehabilitation for children with Down syndrome and associated disabilities, special class in mainstream education. This experiment led to very good results, so the children's parents agreed and specialized professionals, because the municipality of Reghin had no form of education for these children . In the 2003-2004 school year the school began providing support to hyperactive children included in mainstream education by itinerant teacher.
Currently No.3 CSEI SAM Reghin works with a number of 23 classes, total 202 students.

Posted by Imola Fazakas at 5:14 AM No comments: 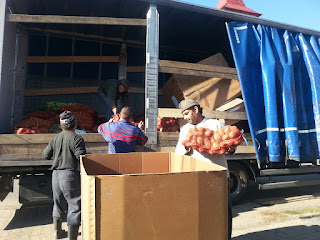 A new loud arreved to us on 4 November with Rob Boden and Sam . This time with lot of vegetables from the farm von Marghita, school furniture wich is going to the Special School Apalina(children with disabilities), biscuits, crackers and sultanas, clouds.
The truck has arrived on Wednesday around  12:30, after a fast coffee we have started the unload . In two hours the truck was empty and ready to go loading the bicycles from Jan Weijnen. On 16:00 o`clock came Ronald Wolthouse and together with the guys went to visit the gypsy neighborhood in Apalina.It is difficult to see all those kids with their family living in poverty to whom fate was  not so generous.After they returned back we had dinner together with all kids and enjoyed each others company. Next morning the drivers left early and we have started to organize the further distribution 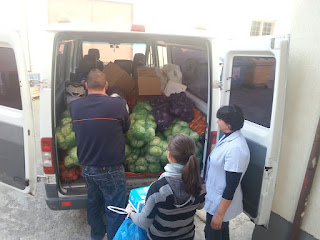 Together with the kids we broth vegetables, medical and incontinence materials to Deda in the Old People home. It feels very pleasant over there ....we were invited for an apple pie and coffee.In these twoo months they plan to enlarge the home capacity with 16 more persons. They have asked for bads and furniture from us. 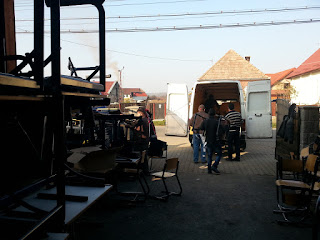 Friday morning  the School from Apalina camed after the school furniture and some tables.Our contact person over there is teacher Odett(you can see her on the pictures).She will make pictures and report about the received goods.
In these time Cristi and his family from Botosani had arrived for vegetables and clouds. He didn't managed to pick up all his part he will return next week again or send somebody for.
Over here you can see more pictures. 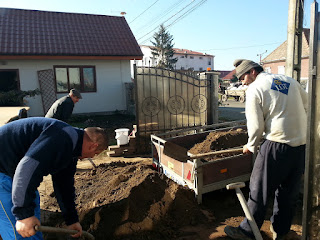 At the moment Csaby is busy with the new heating sistem in the school.Now they are so far that they install the radiators and the pomp .The wood heater from the basement will warm  the classroom from now on. Hopeful today afternoon they finish it.The most difficult part was to dig throw the yard , but lucky we had nice wetter and  of cours handy workers too:-0
More picture about it over here..
Soon the kids come home from the school and after we finish the homework I bring them home.
Thank you for the great transport !

Every year the Bible Week is a very important event to the children of the reformed community of Breaza .

In this year the B.W. was organized between 25-29 August. Every day we worked with the children in  two groups.
The Bible Week’s topic: Shine Star! - from the book of Esther. The closing ceremony took place in the church. The parents were invited as well, and many of them were present.
Usualy 45-50 children attended the ocassions. We want to thank the Foundations Promotie and Van den Heerik for the  „surprise” we could give to the kids.
The children made a little gift to express their thanks.
God bless you! 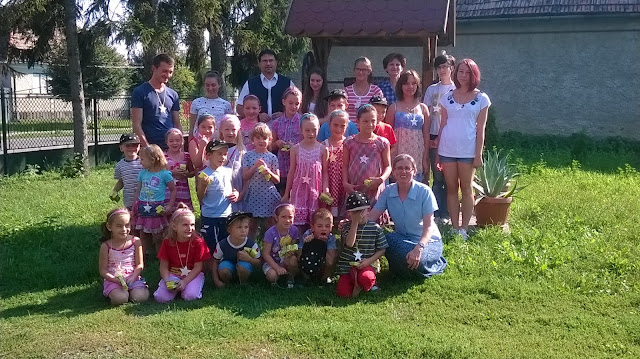 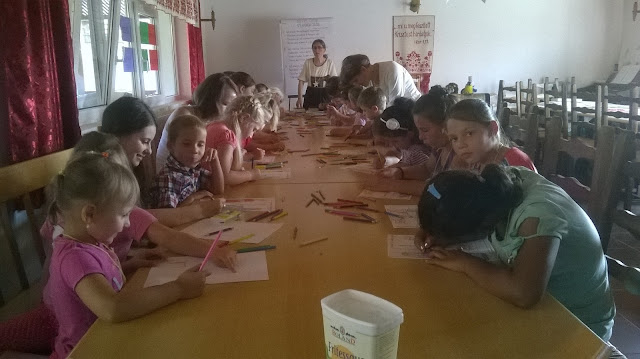 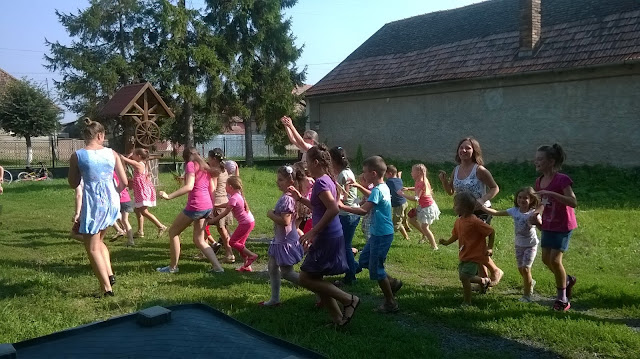 Posted by Imola Fazakas at 6:49 AM No comments: